“You talk of nationality, language, religion. I shall try to fly by those nets.”—James Joyce

This seventh full-length musical collaboration between Buckethead and Viggo Mortensen also includes contributions from Travis Dickerson, Henry Mortensen, Walter Mortensen, and Brigit. INTELLIGENCE FAILURE is a musical ode to the dream of preserving loving, civilized society in trying, often cruel times. Rising above the deceit and greed that have plagued and eventually conquered all the world's empires, there have always been brave individuals and isolated groups that have stubbornly refused to surrender their belief in humanity. This collection is dedicated to them. Combining variations on traditional melodies with original compositions and improvisation, as on previous Buckethead/Viggo recordings, this C.D. also draws from freely available statements by public figures to tell a part of the story of our time. Sometimes humorous, sometimes heartbreaking, INTELLIGENCE FAILURE is never anything less than fully-committed to an honest examination of where we are, and to expressing hope for where we might go. 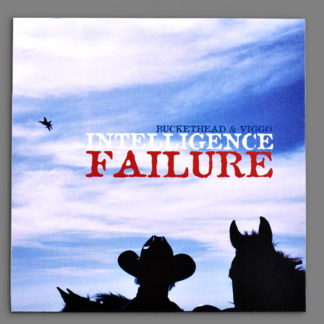