When we look back less than a decade and consider the results of U.S. foreign policy decisions, predicated on and driven by long- and short-term global military-industrial ambitions, they have not been much less surprising or absurdly self-centred than the picture painted by artist Dan Mills' conceptual project US Future States Atlas. When we look back at U.S. foreign policy since the Mexican-American War in the 1840s and right through to the freshly-minted Obama administration's stances on the Middle East (particularly as regards its continuation of the disastrous Israel-Right-Or-Wrong position of previous U.S. administrations), the ongoing occupations of Iraq and Afghanistan, and, most significantly, the unquestioned and clearly-stated intention to continue, through a sustained massive global military presence, to act unilaterally whenever, wherever and with whatever force the U.S. government alone deems appropriate, the predictable imperialist picture seems quite clear. In the words of Phong Bui:

“Mills considers imperialism to be a mediating form that exists between fact and ﬁction. In this moral maelstrom, one thing is certain: his object of desire inevitably will become our object of desire… Mills has found his refuge in conceptual density and minimal lightness. Ultimately, what holds our interest in Mills' work is the tension between what is read and what is seen. It’s no longer imagined. It’s made.” 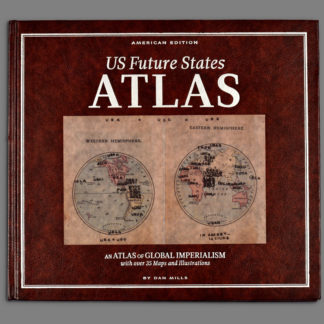